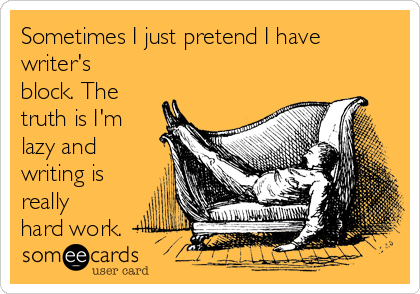 Even though I had a great experience waking up at 6am the other day, doing my yoga, not being rushed to get ready before work, it still wasn’t enough to do it again the next day. In fact, I’ve reverted into a lazy writer! My migraine the last two days could have played an important role in this, but I’m finding it harder and harder to wake up earlier now that I’ve made it my goal. In fact, I woke up at 9:30am today, and that was after sleeping 11 hours! What the heck?! As good as it feels to get lots of sleep last night, I don’t want to go back to doing that every single night. After a while, it doesn’t feel as good and it makes me lazy throughout the day as well.

I am finding that if I do a little bit of writing during the day while it’s sandwiched between completing other tasks, I get it done. But on days like Saturday where I do a little bit of cleaning around the house and then laze around with my three-year-old, playing and watching TV, absolutely no writing gets done. So many writers say you should write a little bit every day, but I find that task extremely difficult. Writing seems easy to many. It’s not like you’re lifting 2X4s or heavy boxes or anything. You’re just sitting and moving your fingers on the keyboard, but it can be mentally exhausting. I think we all need at least a day to have a break. Do you think so?

The only thing I’ve found that works when it comes to putting off my writing is just doing it. I’ll sit here and silently whine to myself that I don’t want to do it. I don’t even know what to write. Why would I write when I don’t feel inspired? But once I force myself to just do it, I can’t stop! So just do it and see what comes out. If after twenty minutes you still don’t feel it, come back later and try again.

If you’ve been a lazy writer before, what was your cure? Share in the comments below. I’d love to hear your tips and tricks!